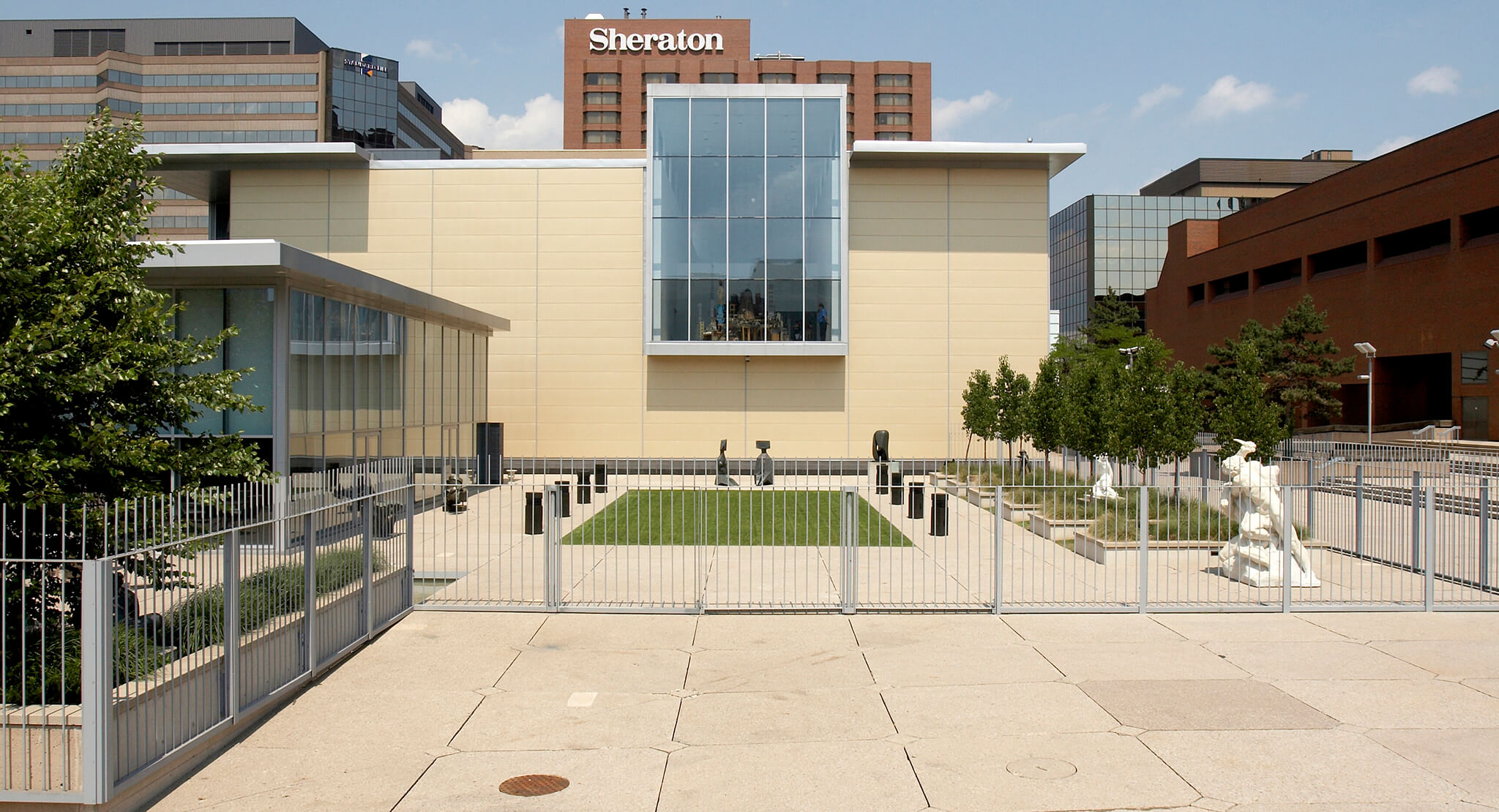 It is a little known fact that the Art Gallery of Hamilton has the wonderful Irving Zucker Sculpture Garden that is open to the public right in the core of Downtown Hamilton. This summer we have welcomed faces old and new to enjoy this fantastic space and its incredible sculptures. Although school has begun, there are still a few weeks left of beautiful weather to come enjoy this space!

The Sculpture Garden has housed some of the staple works of the our collection for decades, which makes it a vital part of continuing the Gallery’s mission to provide accessible arts spaces to our community. Featuring 14 sculptures by 13 artists, there are many major works from around the globe on display. The majority of these sculptures were donated by the Garden’s namesake Irving Zucker, with other pieces coming from the Joey and Toby Tanenbaum Collection, as well as Gifts and Purchases from various sources.

British Modernist sculptor Lynn Chadwick first pursued life in architecture and the armed forces before thriving in his artistic pursuits. Inspired by his passion for architecture, Chadwick began working with construction materials like iron and bronze rods, welding such stiff resources into expressionistic, figurative works inspired by the forms of humans and animals. Nearing the point of abstraction, much of Chadwick’s work nevertheless feels familiarly human, breathing life into cold, hard materials. The two Chadwick pieces in our garden – Cloaked Couple I and Two Seated Figures – are both bronze diptychs typical of the artist’s canon, presenting an interpersonal connection through an impersonal medium.

An enormous figure in twentieth-century Mexican political art, Francisco Zuniga accomplished much as both a painter and sculptor. Inspired by his father’s religious-figure sculptures, Zuniga parlayed his familial education and an interest in Renaissance artistic anatomy into an art career centred around figurative expressions of the human form. Zuniga approached the human with so much reverence that he called the body “the most important aspect of the world around me.”[1] Yucateca, our piece of Zuniga’s body of work, depicts a human crouched in an intriguing, contemplative pose. With over thirty-five public sculptures still making their marks on the world in his passing, Zuniga’s legacy continues in major cities and gallery spaces throughout the world.

A thriving artist of the mid-century St. Ives artists’ colony, the definitively-English Barbara Hepworth achieved high acclaim in an era in which most women artists unjustly received limited attention. Producing Modernist sculptures of abstract, biomorphic stone, many attribute a pseudo-feminine attitude to her body of work. Henry Moore, a friend and rival of Hepworth, shared this curvaceous, nearly-circular style, as the two artists played off one another throughout their careers. Our piece of Hepworth’s history, Hollow Form with Inner Form, was a later piece for Hepworth, showing an artist matured and confident in her visual and conceptual tastes.

Forcing his mark on the world as part of the 1980s New York City street culture, Keith Haring became one of the most-prominent LGBT visual artists of the twentieth century before passing in 1990. His iconic pop art and graffiti murals spoke to major political themes through simplistic visual imagery, creating public space for dialogue around homosexuality and AIDS. Completed a year before his early death, Self Portrait reflects the recognizability of the artist’s visual codes, presenting his own image as a massive, painted-steel form.

So if you work in Downtown Hamilton, or are just visiting, and are looking for a quiet, sunny place to enjoy your lunch, take a walk over to the AGH! We’ll point you in the right direction.