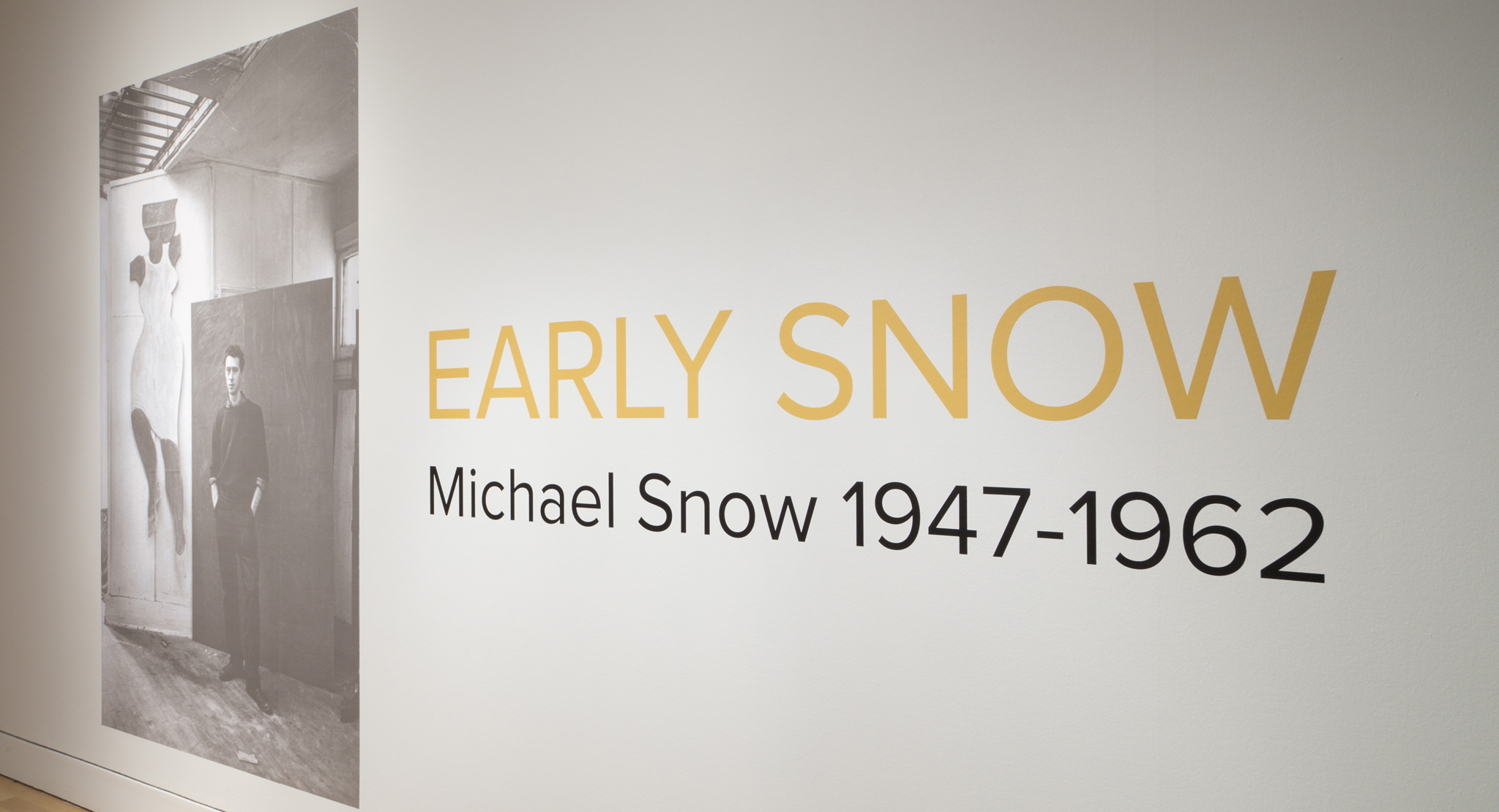 The first-ever exhibition to focus exclusively on Michael Snow’s early formative years, Early Snow: Michael Snow 1947-1962 presents a snapshot of some of the Canadian artist’s first creative explorations. Working for over a half-century since the end of this exhibition’s chronological window, Snow’s practice and career transformed dramatically in the following decades.

Such a prolific career would be impossible to cover in a single exhibition, let alone a single article. Mirroring the endeavour put forth by Early Snow, this snapshot of Snow’s career will look only to provide glimpses into Michael Snow’s history – focusing in this edition on Snow in April.

Featuring the first exhibition of Snow’s iconic Walking Woman works, this exhibition marks not only the end of the Early Snow exhibition, but also Snow’s departure from Toronto to New York City. Sprawled across The Isaacs Gallery, Snow replicated his Walking Woman silhouette across a wide array of two- and three-dimensional planes, re-working the woman’s shape in 30 drawings, paintings, and sculptural constructions. Snow’s interest in this project stretched throughout much of the 1960s, as he worked on them from 1961 until the Expo 67 in Montréal. Critics at this show began a decades-long investigation into the series, examining the works’ strengths and the challenges presented by their presentation. Influential Canadian art writer Paul Duval called the show “Snow’s most ‘difficult exhibition’,” adding, “it presents more challenges than any other – the use of color, for instance, is more abrasive than ever – and strikes more severely at accepted ideas than any other previous display of his art.”[1] Adding to this assessment, Canadian journalist Robert Fulford called the show “the most promising of Snow’s career,” pointing to the artist’s “return to figurative subject-matter [as] adding a richness to his paintings that I have found almost totally lacking in his abstracts of the past few years.”[2] In short, then, this exhibition proved transformational for Snow’s art practice as he moved towards further exploration in the Walking Woman series, in addition to his continued pursuit of film and video experimentation with his move to New York City.

Over a decade after his move to New York, Snow brought a series of photo and video experiments back to the iconic Toronto gallery that championed the work of both himself and contemporaries such as Joyce Wieland, William Ronald, and William Kurelek. Amidst the works on display was a double-sided 16mm installation, Two sides to every story. Comprised of a metal screen hanging from the centre of a room, with projections on both sides in continuous loops, the work plays with the viewing experience by forcing viewers to navigate the space of projection. Describing the impact of the work, Spanish contemporary art website àngels barcelona notes that “Snow breaks down the single viewpoint of the camera, redefining the cinematic as a complex spatial experience.”[3] Indeed, while Snow often played with redefining cinematic space on-screen, this work features Snow redefining the exhibition space itself. Reviewing the exhibition, Toronto journalist Sol Littman called it “anything but boring… an ardent exploration of the ways in which color photography be used in art, as Snow experiments with every potentiality inherent in lense and film.”[4] Even further, Snow himself noted at this exhibition’s opening, “I have been working with cameras for many years and was the first to use it in a non-photographic way,” pointing to this show as a singular act of redefining both cinema and photography.

Encapsulating much of the major work throughout Snow’s career to this point, Canadian curator John K. Grande described The Michael Snow Project as a “daunting mega-multi-media show.”[5] The exhibition featured a range of Snow’s film, sculpture, painting, photo, foldage, and collage work, and stretched itself across two major Toronto arts institutions. By this point nearly a half-century since the start of Early Snow’s focus, Snow had exhibited at Paris’s Musée National d’Art Moderne, the Montreal Musem of Fine Art, and the National Gallery of Canada, as well as becoming the first Canadian post-war artist to have a solo show at The Museum of Modern Art in New York. Deemed a “retrospective” of a career that would then continue over 26 more years to the present day, the exhibition garnered reviews locally and nationally, including one by Maclean’s Pamela Young, who pointed to Snow’s future as perhaps the most exciting feature of the massive show detailing his past. “He will probably move on to something completely different when the hoopla surround his retrospective subsides,” Young wrote, “stay tuned.”[6]

Of course, these are just some of Snow’s many artistic achievements throughout the Aprils of his long career. Amidst the many exhibitions spanning multiple continents and multiple decades, some other April exhibitions of note include his 1980 Retrospective at the National Gallery of Canada, a 1988 exhibition at Tokyo’s Hara Museum of Contemporary Art, the 2001 Almost Cover to Cover exhibition organized by Arnolfini in Bristol, and the 2016 Video Fields et En Haut at Galerie Martine Aboucaya in Paris.

To learn more about Early Snow during our temporary closure, check out more AGH Magazine articles and our first-ever online exhibition, AGH at Home. Upon our re-opening, be sure to grab a copy of the Early Snow exhibition catalogue or the Michael Snow: Lives and Works biography by curator Dr. James King.