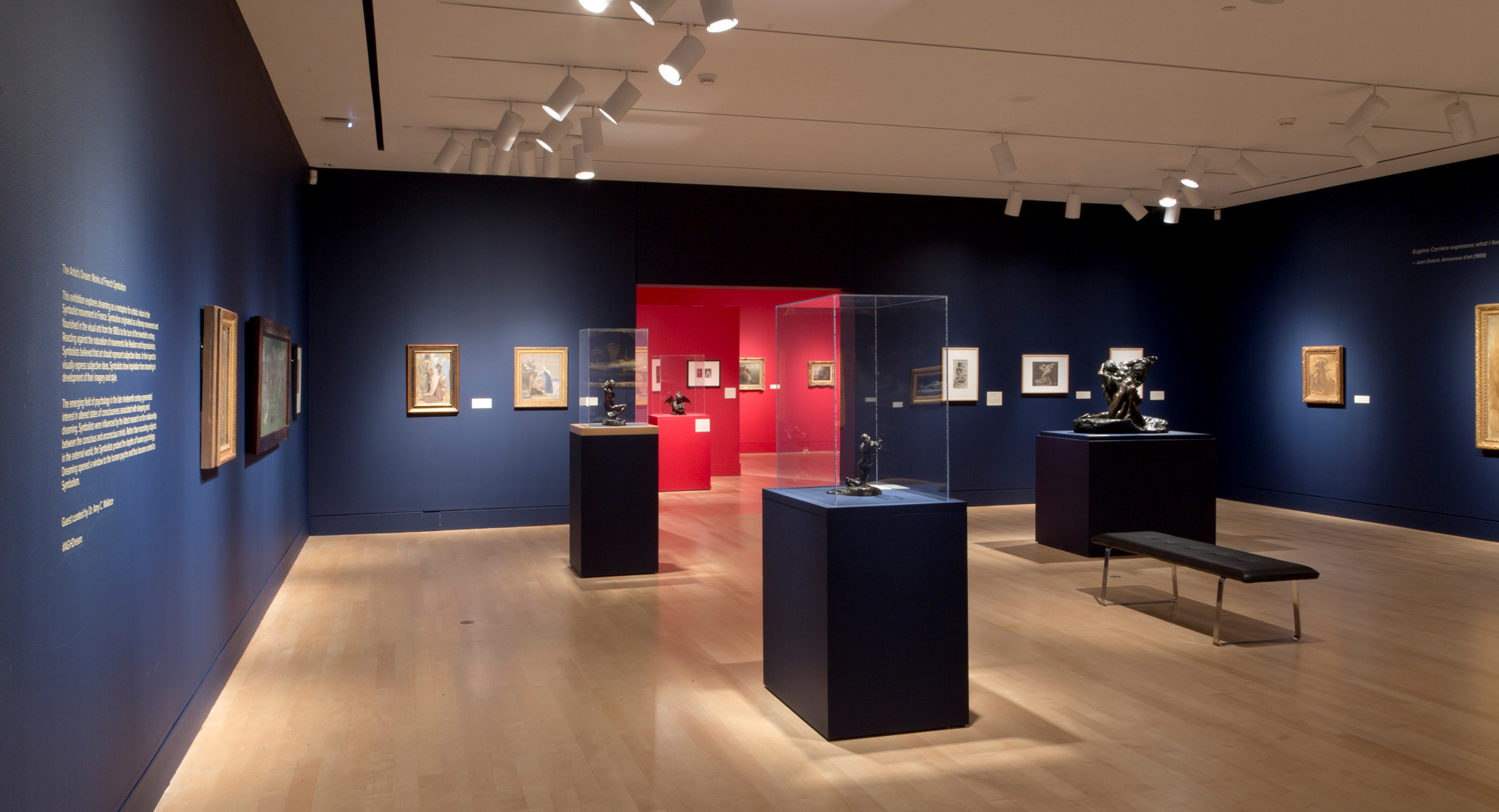 The Art Gallery of Hamilton’s exhibition The Artist’s Dream: Works of French Symbolism explores dreaming as a metaphor for artistic vision in the Symbolist movement in France. The exhibition paid special attention to the important contributions of women artists to French Symbolism. Continue reading to learn about the female creators who participated in this fin-de-siècle movement.

In addition to her theatrical career, the actress Sarah Bernhardt was accomplished as a painter and sculptor and exhibited regularly at the Paris Salon. The exhibition features Bernhardt’s Self-Portrait as a Sphinx (1880), which was recently acquired by the Montreal Museum of Fine Arts. In this decorative inkwell, Bernhardt transforms herself into a mythological creature. In so doing, the artist has undergone a metamorphosis not unlike the ones she enacted to embody her dramatic personas. The French title of this sculpture is Autoportrait en chimère. In addition to denoting the mythological creature, chimère means an illusion or dream. This fantastical portrayal of Bernhardt might equally be interpreted as the artist’s vision of herself in a dream.

The Symbolist prints and drawings of Jeanne Jacquemin were praised by her contemporaries. However, the full extent of Jacquemin’s contributions have been obscured through history. In 1894, the writer Edmond Pilon (1874–1945) situated Jacquemin within the Symbolist movement and expressed the utmost admiration for her art: “I would like to write several long chapters on the beautiful, poignant rhythm that is always displayed in her painting. This enchantress, who comes centuries after Botticelli and Ghirlandaio and lives as a contemporary of Gustave Moreau, has had the amazing audacity to reveal the divine mysteries of her garden of dreams to us.”[1]

Jacquemin’s Saint George (before March 1898) depicts the Christian knight who saved the King of Libya’s daughter by slaying a dragon. Rather than depicting the climactic moment when Saint George thrusts his lance into the dragon, Jacquemin portrays the saint in a state of calm contemplation. The attributes normally associated with Saint George—such as his white horse and lance—are eschewed in favour of presenting a psychological portrait of this Christian martyr. Due to the figure’s androgynous appearance, it has been suggested that Jacquemin may have depicted herself as Saint George.[2] If indeed Jacquemin intended Saint George to be a disguised self-portrait, it is a powerful counterimage to the trope of the female seductress that pervades Symbolist art.

The sculptor Camille Claudel prodigiously captured a spectrum of emotions in her figurative works, which together stand as a testament to the human condition. The Implorer (modelled 1898, cast c. 1905) is one of three figures depicted in Claudel’s monumental The Age of Maturity, which is widely considered to be a masterpiece of French sculpture and represents the height of Claudel’s artistic achievement. The supplicant gesture of The Implorer conveys the conflicting states of hope and despair and typifies the Symbolists’ interest in human psychology.

The reception of Claudel’s work has been informed by the fact that she studied with Auguste Rodin (1840–1917) and that they were later in a romantic relationship. Two sculptures in The Artist’s Dream, however, challenge the ordinary narrative of influence from teacher to student that has shaped our understanding of Claudel’s talent: Claudel’s Young Girl with a Sheaf (modelled 1887, cast 1983) and Rodin’s Brother and Sister (1890). The correspondence between the pose and features of the female figures, as well as the earlier date of Young Girl with a Sheaf, points to the influence of Claudel upon Rodin.[3]

The art of women Symbolists is relatively rare compared to the abundance of works by their male counterparts in permanent collections of public museums. This difference is partly due to the fact that the work of women artists has historically been undervalued. As a result, art made by women was not as thoroughly documented and collected at the time of its creation. While hundreds of sculptures by Rodin reside in public collections throughout North America, for instance, only six works by Camille Claudel are available. The Artist’s Dream gave the public the rare opportunity to view two of these six sculptures by Camille Claudel. The inclusion of these works by Claudel and other women artists in The Artist’s Dream was made possible by important loans from the Metropolitan Museum of Art, the Montreal Museum of Fine Arts, the National Gallery of Canada, and the National Museum of Women in the Arts.

Dr. Amy Wallace is the curator of The Artist's Dream: Works of French Symbolism.